Bitcoin Eyes $14K as US Dollar Breaks Below Classic Support

Bitcoin climbed higher during the Wednesday trading session as demand for alternative safe-havens remained stronger against an underperforming US dollar.

The benchmark cryptocurrency rose 5 percent to close at $11,756.75 (data from Coinbase). Its gains followed a record upside run in the gold market, wherein the precious metal surged further higher after breaking the $2,000-milestone. Overall, the rally in scarce assets illustrated fears of inflation among investors. 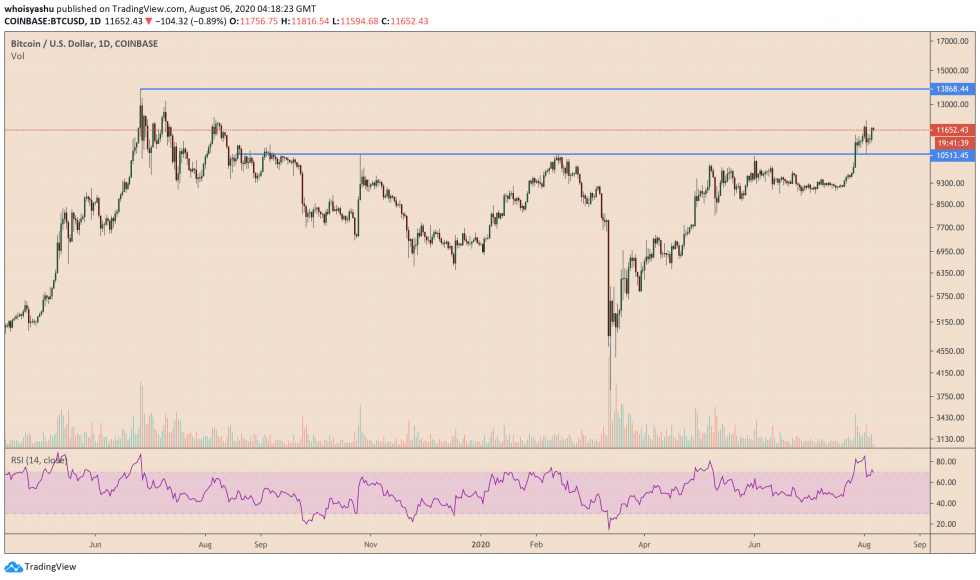 BTC/USD surges higher on Wednesday as the US dollar continues its decline. Source: TradingView.com

Luca Paolini, the chief strategist at Pictet Asset Management, said in a statement to FT that investors are practicing caution after the stock market’s humongous rally post-March.

She believed the Wall Street valuations stand overstretched as “downside risks to earnings remain.” She also noted that fears of a massive correction had sent investors looking for safety in the bond market, which itself is even more expensive, and is offering the worst yield in two decades.

More Declines for US Dollar

Meanwhile, the latest decline in the US dollar further suggests that investors do not want to park their capital into the greenback. Part of the reason is Fed’s open-ended easing policy with a liberal inflation target at 2 percent – and the US Congress’ trillions of dollars of stimulus packages that are pushing the greenback into an oversupplied territory.

That has lifted the appeal for Gold as a next-best diversifying asset. Meanwhile, Bitcoin is merely cashing on its decade-long safe-haven narrative.

Technical levels on the US dollar index chart also show the basket heading into a further weaker trajectory in the coming weeks. 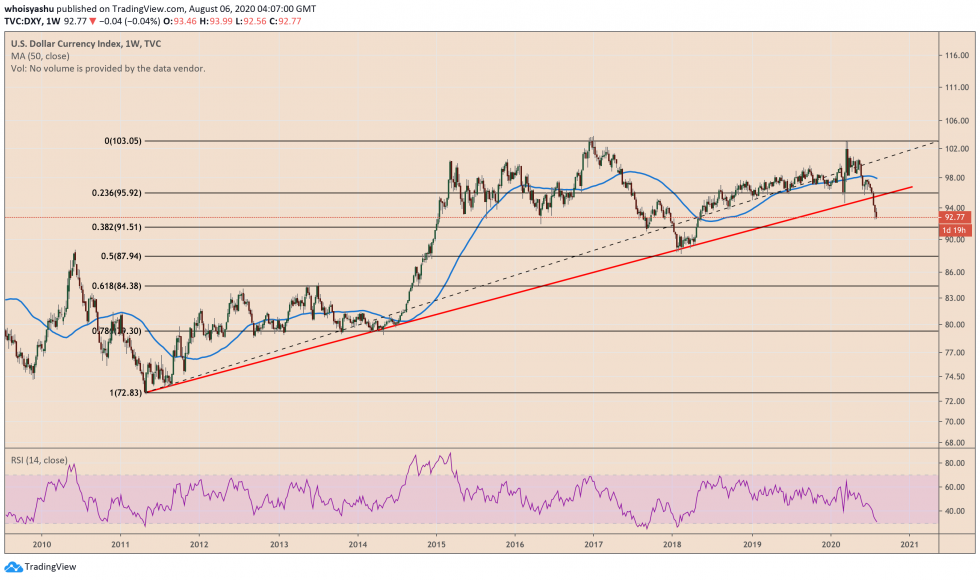 DXY in July 2020 shattered a support trendline that held it from extending its bearish bias since 2011. The index confirmed a breakdown by continuing to move lower with adequate volumes. Its accelerating sell-off against the stimulus package and poor unemployment data now sees it declining further to 91.51.

The same level of support was instrumental in sending the DXY higher in September 2017. Therefore, selling pressure may start reducing near the familiar price floor.

For Bitcoin, the short-term bearish outlook for the US dollar may spell an extended bull move towards $14,000, a level near its 2019 high.

Scott Melker, a cryptocurrency analyst, noted a similar inverse correlation between Bitcoin and the US dollar index, noting that it would prove “insanely bullish” for the cryptocurrency.

“It’s early in the monthly candle, too soon to judge,” said Mr. Melker. “That said, the dollar looks ready to take a jump off the side of a mountain. This would be insanely bullish for BTC.”

Bitcoin was trading near $11,624 at the time of this writing.